New Hot Tub and patio at Courthouse Dairy -photos when the sun is out !!

As promised new photos of the New hot tub, New Patio and garden in the sunshine 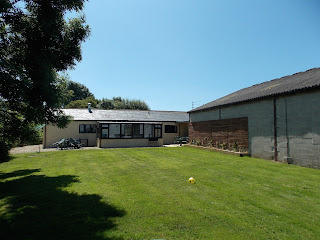 And after all the fun relax and enjoy a homemade cream tea!
Posted by Alison Wilkinson at 10:26 No comments:

With the stunning golden glow of the majestic sandstone cliffs to the east and the shimmering radiance of Golden Cap to the west, West Bay, Dorset is a Golden Gateway to the Jurassic Coast. West Bay nestles south of Bridport, between Eype with Seatown to the west and Freshwater with Burton Bradstock to the east. Situated at the western end of Chesil Beach / Chesil Bank, the area forms part of the Dorset Jurassic Coast World Heritage Site within Lyme Bay. West Bay, Dorset is a wonderful seaside location for family holidays, coast and countryside walks, fossil hunting, fishing / angling trips, scuba diving, paragliding, golfing, river boating and so much more. The Dorset historic market town of Bridport lies one and a half miles inland from the West Bay coast.
Posted by Alison Wilkinson at 09:42 No comments: